GORUCK Expedition Heavy 001, Navigator Heavy, Heavigator? – whatever you want to call it, is in the books. And you probably missed it, and missed out. Good job.

This event started out much like other events and races. Cadre gave a brief overview of who they were, what (roughly) we could expect over the next 24 hours, and what was expected of us. It was made clear that while there wasn’t going to be a ton of mindless PT to beat us down, this was still very much a Heavy. There would be very little downtime, information would come at us fast, and we were expected to retain it the first time.

There would be no droning out during this event. We were expected to be on our toes and engaged at all times. Roll call was taken, gear was checked, and we got weighed in (ruck and personnel). 17 souls, stepping off.

We moved immediately into the UBRR (Upper Body Round Robin) test to individually assess the strengths and weakness of each team member. I personally haven’t tested my situps in ages and was a little twitchy about that element, but everything went fine. This was not a drop element, but you were definitely informed of your failures. The run portion of the test was deferred until later – I personally would have much rather just gotten out of the way up front, but keeping that aspect floating over our heads was a nice way to ratchet up nerves.

Once the team had cycled through all other testing elements, Chris Way gave instruction on how to fit a climbing harness and we were set loose on a climbing wall. The goal was for each participant to run 10 climbing routes in ~an hour. I have a decent background in sport climbing and this volume was definitely nothing to be taken lightly. If nothing else, it would greatly diminish people’s ability to perform heavy carries later in the event. I went a little nutty on my routes and wasn’t loving life later on.

Watching other teammates overcome their fear of heights / the unknown and tackle the climbing portion was a great way to start the working portion of the event.

Getting our learn on.
Cadre made it clear that every aspect of this event would be done with intensity – that includes classroom instruction. In small groups, cycling stations every few minutes, we covered: basic map navigation, mission critical knots, correcting for declination, calculating pace count (walking and running), construction of load bearing rope systems, and dead reckoning vs using terrain & attack points.

Got it? Ok. Good, moving on. You’ll be tested on all that later. In the dark, under duress.

Gear up, we’re moving in 60 seconds. The friendly indoor portion of the event was over and we were on the move to begin refining skills under real world conditions. The team moved a mile or so south of the start point and cut off the main drag into a trail system. It was dark, woods were thick, and we were about to begin a series of dead reckoning exercises.

Each team member was responsible for leading the group along a given heading for a set distance (usually only 100m or so), then shoot a back azimuth and get us back to our exact start point. Sounds easy, but if you aren’t used to counting your steps, adding fudge factor for weaving around impassible obstacles, adjusting your pace count for terrain, and keeping your eyes on your instruments – all at the same time, while leading a group – it can be a daunting task. 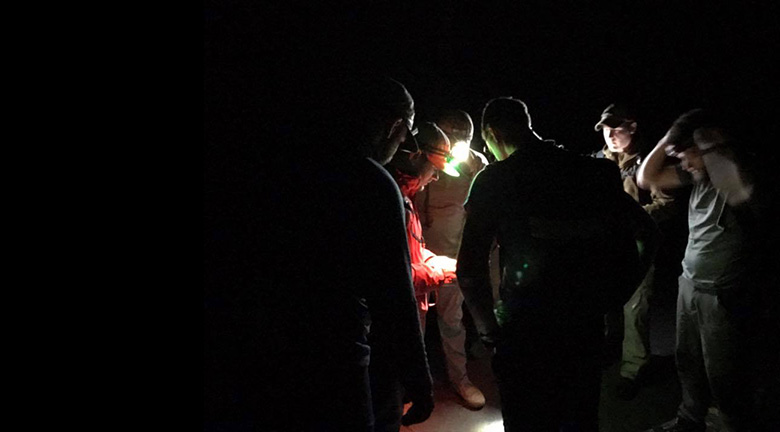 Once everyone had their chance to TL we were sent off on an unknown distance run (as a team) with the task of maintaining a good estimation of distance. I know -my- running count, but running in a group radically changes stride / pace, so keeping a good count here was a nightmare.

Chris Way brought out toys and gave us a lightning fast introduction to Search and Rescue avalanche trackers. The goal being to use one’s own device to locate the unknown position of a fallen/missing/endangered teammate. Beacons were hidden in the woods and one by one folks were sent off to recover their targets in the dark. While our team members were out hunting, the remaining group would get PT’d or tossed into stress positions. Intensity was maintained, as promised.

One final teachable element, as a team, was splitting into small squads and instructed on following a handrail (the trail in this case) through overgrowth for various distances. More stumbling in the dark, tripping over logs, and thorns. So many thorns.

With the “getting smarter and better at stuff” portion of the event well underway, it was time to get strong. This is still a Heavy after all.

We emerged from the woods at a road crossing, and a support vehicle rolled up. A pile of logs, tarps, and 2 liter soda bottles were dumped out. We got a quick refresher course on construction of litters for transporting “injured”, or in our case, “big ass logs”. Half the team got started on their construction while the rest of us got briefed on the soda bottles.

From this point forward, everyone was required to have a 2L bottle affixed to the top of their ruck. Cadre would periodically be puncturing these bottles to simulate a massive hemorrhage, and it was the team’s responsibility to ensure that no one “bled out”. If a bottle dropped below half full, that person was a casualty.

Read: From here on out, Cadre would randomly be stabbing people in the back and we needed to have a fast reaction plan to duct tape them back together. Toot sweet.

At this point it was ~3am at a Heavy. I won’t bore you with the details, but we carried heavy things a long way and every once in a while someone got snippy with someone else. Happens every time, this time was no different.

Running around and setting fires.

Sunrise was at 0655. We arrived at the beach around 0645. We were then reminded that we had still yet to complete the running portion of the UBRR.

Time for a sunrise run up the beach. Mocha then informed us that we were to complete a 4 mile run. We were to head west along the beach until we ran out of room to run, then turn around and return to cadre for further instructions. An 8:00 min/mi pace was expected. We all nervously smiled at each other regarding the impossibility of this request. Mocha did not return the favor.

We were given a countdown and then were off. The sand was looser than I feared, and we had a headwind. Super. Dooper.

I’m not a great runner, but wanted to do at least ok, so I shot for negative splits and hoped that I would run out of beach before my body/brain/lungs quit on me. I came in second with a time around 34:30, and a heart rate somewhere in the “you should probably sit down” range. Beach running is awful. All running is awful, but beach running is more awfuller. 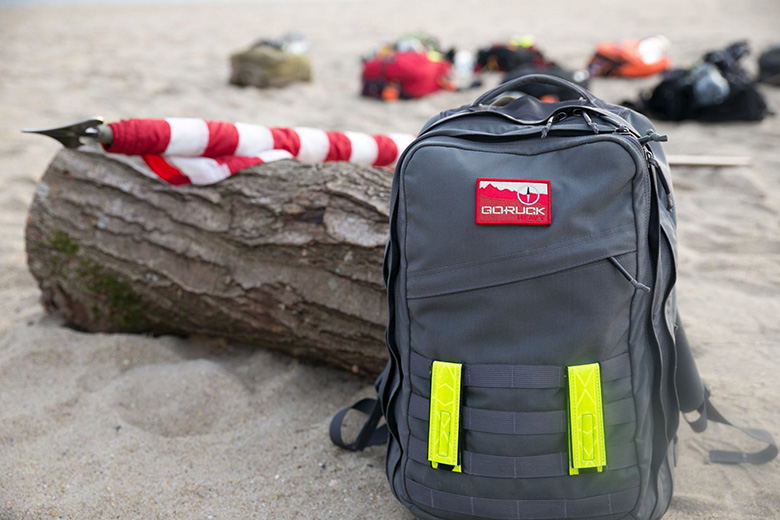 Pays to be a winner. As people came in, they got a chance to refit on water, check their feet, and down some chow. Well, they did, I got sent off by Cadre to start collecting firewood. Looked really nice over there though. -_-

Once everyone was back and refit, we collected more firewood and Chris Way led a quick and dirty demonstration on how to build fires. Survival fires are best appreciated when you really need a fire, so we were told to strip down and get into the ocean. We did. It was cold. People got really good, really quick about tending to the warming fire until we got orders to get ready to move again.

Pays to be a winner. Pays to pay attention.

We were split into two groups and informed that it was now a competitive event. TL and ATL from each group were pulled aside and given two grid coordinates. The first was a target in the wooded area to our south, the second was a rally point to the east. We were to move to the first point, activate our SPOT tracker, then move as a team to our secondary objective. Easy enough.

But first we needed to demonstrate our knot tying abilities based on the rapid fire instruction we received ~12 hours previously. Oh, and cadre kept stabbing our bottles, so we constantly needed to break and tend to the “wounded”.

We did (mostly) and were told that our time hack for the next movement was one hour. We completed it in just over 3.

Moving heavy stuff, through thick stuff, over wet stuff is nasty slow going. Our maps were 30 years old, and we were trying to navigate through sand dunes. Sand, if you aren’t aware, moves around a lot – on account of being sand.

Cadre were not, let’s say, impressed.

Instead of a planned rest break, we got a chance to fix our water situation, down some chow, and get our next set of points. These looked far more manageable, so the team stepped off in high spirits. Navigation was pretty straight forward, we shot a heading to a river, and just had to follow that handrail for around a kilometer. Of thorns. Chest high, blood thirsty thorns. Other than that it was great and we didn’t waver off track. Our second point point was southeast from our first, and we thankfully found a light trail that took us most of the way

From there it was a simple matter of stomping through knee high mud around half a lake to rendezvous with cadre and the other team. Turns out their route took them along the beach. Sounds like it was a nice stroll. 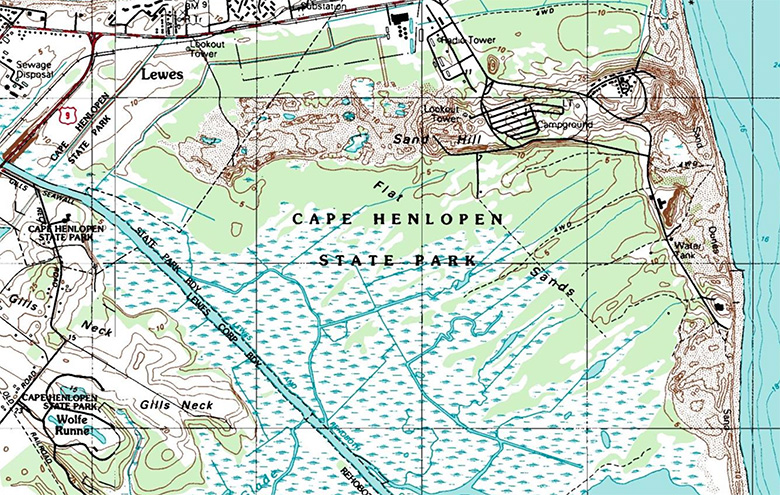 We were again one team, and given a little bit of downtime to sort ourselves out. While we were checking bodies and gear, cadre were unloading flat tires, 2x4s, and chunks of fence post from a truck. It was time to build an Apparatus. If you’ve never done this before, it’s a hoot.

Your task to take whatever materials your team are given, and construct some form of cart/buggy/sled to move a crushingly heavy load. The “trick” of the exercise is that none of the pieces really work well together, so no matter how good your plan or intentions, your team is just going to have to suck it up, work together, and muscle through a plan that slowly unravels.

Somehow, our device stayed mostly together and we made pretty decent time. Eventually we were halted, the contraption was broken down, and we prepped to a litter for casualty carries to our ENDEX. We loaded up and started moving with a purpose. It was cold and getting colder, and we all new that a patch, beer, and possible taco truck were up the road waiting for us.

The team worked well in transporting personnel and gear, and in a reasonably non-terrible amount of time were back at the start point and given the order to down our rucks.

The class had an surprising large number of first timers, but all 17 that started finished the event. It was a very solid 24 hours, but definitely an incredible experience, and great exercise in which to practice skills in near real world conditions. Cadre were fantastic, and I highly recommend you check the series out if you have interest in getting off the beaten trail. 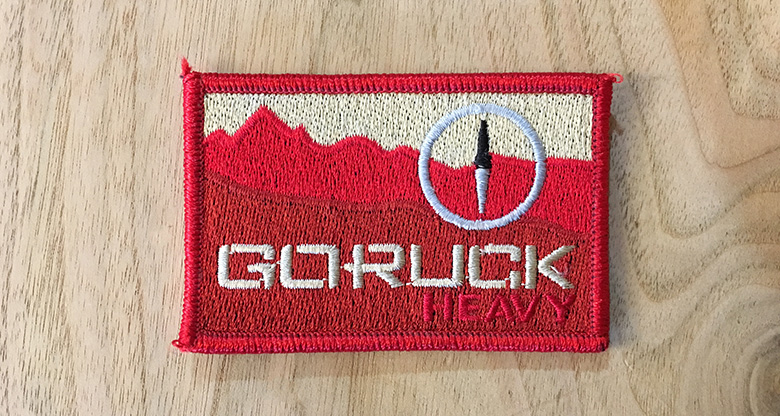 What I brought that worked:

What I wish I brought:

What can be refined:

Leave a Reply to David